My reflections and musings on the struggle to leave a Christ-shaped impression on the world of law and public policy. 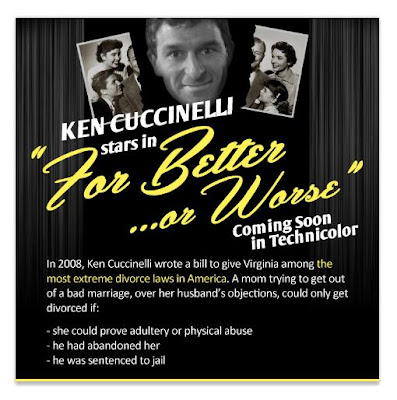 Where shall I begin with my reasons for being outraged by this latest political ad put out by Terry McAuliffe's campaign? McAuliffe wants to be Virginia's next governor, and his strategy apparently involves duping women into believing that his opponent, Ken Cuccinelli, sponsored legislation that would make it harder for "moms" (but not dads) to get divorces. This assumes, of course, that we "moms" place a premium on the availability of quick and easy divorce.

I resent this ad for making a mockery of a sacred marriage vow [note the "Leave It to Beaver"-esque graphic and the old-fashioned, "I Love Lucy"-esque font of "For Better or Worse"]. This is a vow that my husband and I took before God. While we, like most couples, have not kept our vows perfectly, I hope and pray that we will keep this particular one, for the permanence of the marriage relationship is its very essence.

It is repulsive to me that a political campaign would seek to win my support by scoffing at a principle as noble and good as simple loyalty and commitment to one's family.

I refute the ad's deception. The ad makes it sound as if Cuccinelli's bill targeted "moms," making it harder for them, specifically, to get divorced if their husbands object. This is simply false. The bill (of course!) applied the same way for both spouses. Obviously McAuliffe's campaign wants to prey upon a woman's fear of being trapped in an abusive situtation. But abuse is always a legal justification for divorce, and Cuccinelli's bill would have done nothing to change that (for, as it turns out, Cuccinelli is not, in fact, a monster).

What the McAuliffe camp apparently doesn't think we "moms" will figure out is that Cuccinelli's bill would have helped the countless struggling moms who have been left holding the bag when their husbands decided to walk out on the family for no reason other than that marriage was no longer exciting, or that the demands of child-rearing had become difficult.

Finally, I reject the premise of the ad: that no-fault divorce is good for women and that we therefore favor its ready availability. Divorce is one of the leading causes of women and children being thrust into poverty. It is not good for women; it is not good for anyone, but rather is a necessary evil under certain circumstances. This is why I (and many other women I know) believe that legislation like that proposed by Cuccinelli makes good sense. Is it unreasonable to insist that, at least when the marriage has produced children, the divorcing spouse should actually identify a reason for breaking up the family? I think not.

McAuliffe's campaign may think that they have done something really savvy and "progressive" by making the permanence of marriage appear to be silly, oppressive, and out-dated for women. If so, then they are sadly out of touch with the better part of human nature. I have seen enough gray-haired couples holding hands and laughing at cherished family memories to know that I want that "for better or for worse" kind of marriage. I have been married long enough to know that we are all sometimes "better," and we are all sometimes "worse." But if society is ambivalent to whether or not our own spouse sticks with us through the days when we are "worse," then what kind of society is it, and what security does it provide?

No one benefits from laws that make it "easy" to abandon a family. When our society stamps approval upon a parent's decision to break a family--and his own vows--simply because he has changed his mind, we all lose.
Posted by Rita at 8:43 AM